Quick overview of recently released comparative aid statistics from the OECD-DAC for 2015. Click on images below to see full page view. 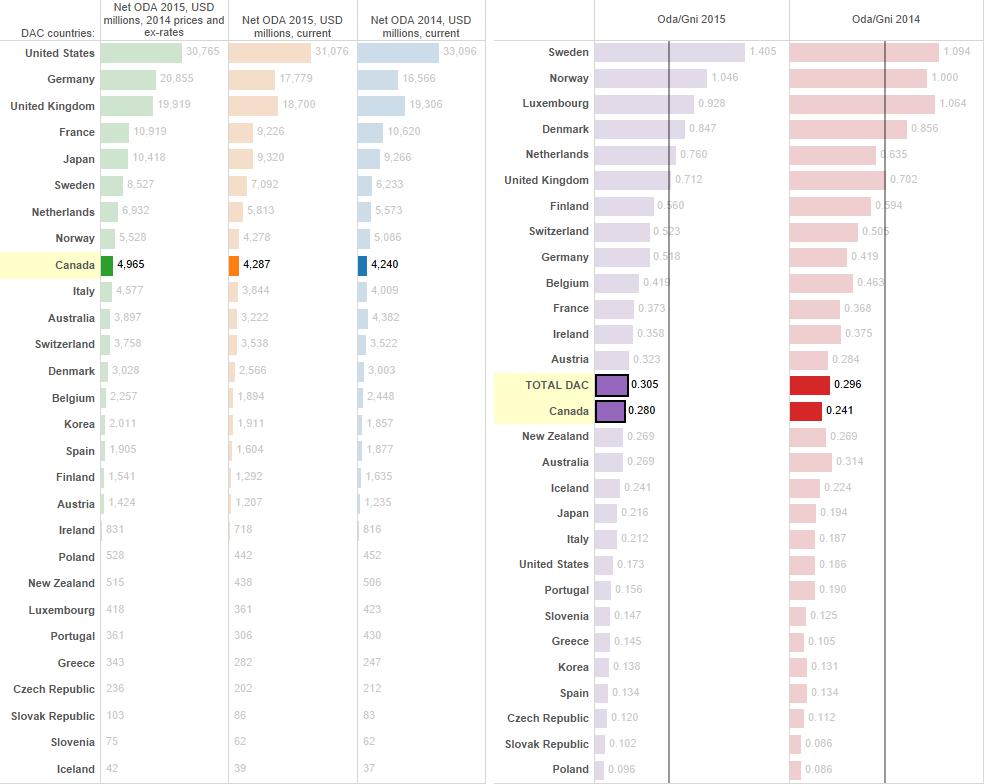 According to the OECD-DAC, “ODA is up 83%  [in real terms] since 2000, when the Millennium Development Goals were agreed”.

The OECD-DAC numbers, while official and high quality, can be challenging to interpret. Two pieces of the puzzle are critical to understand in order to interpret the most recent data i.e. for 2015, appropriately:

It bears repeating just how much refugee costs are impacting ODA numbers.

Take for instance Sweden, Germany and Netherlands. The DAC reports increases in ODA for each respectively of 36.8%, 25.9% and 24.4%. If we strip out in-donor refugee costs however, these increases fall substantially – to 9.8%, 5.8% and 15.4% respectively. In other words the sharp increase in ODA is driven by the dramatic rise in refugee costs.

Even more extreme examples are Austria and Denmark – ODA has reported to have increased by approx. 15% and 1% respectively. Strip out refugee costs, ODA fell, substantially, approx. 7% in each case.

This is a preliminary analysis of headline figures which provide only a partial sense of Canada’s wider contribution to international development.

The story – and CAD$800 million+ problem – behind Canada’s numbers

Headline figures taken at face value are highly misleading especially if viewed as a reversal of recent (downward) trends, at least in Canadian ODA. While refugee costs are a major explanatory factor especially for most large European donors. They are not a factor (at least not yet i.e. not in this reporting cycle) for Canada.

However there are two other important issues in this particular reporting cycle.

From Canadian data – released back in December 2015 and updated again in March 2016 – we know there are exceptional items in this particular year.

Together these account for a CAD$800 million+ one time anomaly in reported Canadian ODA.

While there is not a one to one relationship between Canadian and DAC data (due to currency and fiscal vs. calendar year normalization), one can safely conclude that if the impact of these one-time entries is stripped out or somehow smoothed, Canada’s ODA declined, not increased (as suggested by the DAC and discussed above). Indeed, stripping these payments out would show that Canada’s ODA/GNI ratio declined further.

These findings, while not without problems, nevertheless represent a serious challenge to the integrity of the DAC’s data.