Tracking the Tracker: How is Canada Really Doing on International Assistance and Civil Society? 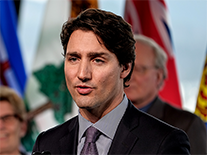 by Gavin Charles, Policy Officer at the Canadian Council for International Co-operation (CCIC)

As Canadians implement – or abandon – their New Year’s resolutions, it’s also an appropriate time to reflect upon how the Canadian government is acting on the pledges it has made. As case studies, we can consider the government’s record on supporting global development and Canadian civil society.

Helpfully for our purposes, late last year the government unveiled its new website for tracking progress on the 364 commitments made in the Prime Minister’s mandate letters to Cabinet. Commitments were assessed on a range from “completed – fully met” (66 commitments received this score) to “not being pursued” (just three commitments have been openly abandoned, the most well-known of these being the commitment to pursue electoral reform). The clear majority (218) were evaluated as “underway – on track.” Just 13 of the government’s commitments – according to the government – are “underway – with challenges.” One commitment is reported as completed in a modified way (the resettlement of 25,000 Syrian refugees, the timeframe for which was extended), and 21 are “on-going” (i.e. cannot be completed at a fixed point).

For Canadian organizations working with the government to deliver global development and humanitarian assistance, many of the points of progress noted in the database rang true. Canada is indeed refocusing its development assistance, specifically identifying gender equality and the empowerment of women and girls as priorities under its Feminist International Assistance Policy. It is doing so in support of the 2030 Agenda for Sustainable Development, with emphasis on Sustainable Development Goal 5 concerning gender equality. The database draws worthy attention to Canada’s positive engagement through the UN Human Rights Council, the Community of Democracies, and the Equal Rights Coalition, among other multilateral forums. The recent launch of Canada’s new National Action Plan on Women, Peace and Security was a good example of improved collaboration within Cabinet, with five Ministers in attendance.

Some of the other commitments that are indicated as underway and on track are less clear-cut. Canada has announced additional support for United Nations peace operations, as committed in the mandate letter to the Minister of National Defence (albeit after much delay); but no actual deployments have been made and the number of Canadian military personnel on active-duty UN missions has continued to decline. Similarly, while it’s good to hear that Ministers of National Defence, International Trade, Development and Foreign Affairs have been collaborating on their respective policy frameworks, true policy coherence requires harmonized objectives. A commitment to a human rights-based and feminist approach in foreign policy, for instance, is incompatible with the sale of armoured vehicles to a government that abuses human rights, including women’s rights.

The Prime Minister’s mandate letters also addressed the legislative and policy environment in which civil society organizations operate. It included commitments to make that environment more enabling – including by ending “political harassment” of charities, and amending “problematic elements” of Bill C-51. The government reports that both commitments are “underway – on track.” However, the Minister of National Revenue has still not fully ended (though she has suspended) Canada Revenue Agency audits of charities for so-called “political activities” – otherwise known as public policy engagement and advocacy. And while the government’s Bill C-59 is certainly an improvement over Bill C-51 – particularly in tightening definitions for “terrorist propaganda” and “undermining the security of Canada” – it remains vague and sweeping. As such, it represents a serious risk for both international and domestic organizations, if not under this administration then under a potential future one wishing to exploit loose laws.

Most worrying, though, is the government’s claim that its commitment to create a new policy and funding framework for Canada’s international assistance is “completed – fully met.” As the database notes, a “comprehensive, feminist international assistance policy is in place.” Yet, the commitment was clearly not only to a new policy, but also to a new funding framework. The Feminist International Assistance Policy is absolutely a welcome shift forward in Canada’s policy. However, it is unaccompanied by any funding framework, much less any new funding for Official Development Assistance – which is at a near-record low at just 0.26% of Gross National Income (that’s 26 cents out of every $100 in Canada). With this old and inadequate funding framework, the government’s commitment is far from “fully met.”

The express purpose of this new database is “to help Canadians hold the Government accountable.” There’s no doubt that it achieves that objective. The Mandate Letter Tracker juxtaposes the government’s commitments, what it has done so far, and its assessment of that performance. In this way, the Mandate Letter Tracker helps Canadians to judge both how the government has done and how accurately it is reporting progress on its resolutions.