Coming into 2020 Canada’s aid spending was near its lowest level as a proportion of national income and in the bottom half of all OECD-DAC donors. And yet, Canada’s global response to COVID-19 (as our data annex illustrates) has been among the fastest and strongest. Even so, at present, Canada is an outlier in many respects and its experience is a lesson to donors in the importance of measured rhetoric and meaningful transparency.

Canada’s Covax dilemma is a result of political not health factors. It shows simplistic ideas about burden sharing and solidarity popular in the development sector are unconvincing to the public.

The OECD’s Development Assistance Committee (DAC) is working on soon to be released data that will likely praise donors for ‘stepping up to the plate’ in increasing foreign aid in response to COVID-19. Our analysis urges caution. The picture is as much one of ‘plugging holes in the dam’ of a system that donors consistently fail to adequately resource in more normal times.

Canada’s global response to COVID-19, which we estimate to be CAD$1.5-1.6billion, has been among the fastest and strongest. This is the single largest foreign aid infusion in a fiscal cycle in Canadian history. It makes Canada one of the largest donors to date. But it is hardly surprising. According to the IMF’s latest fiscal monitor Canada’s total fiscal response to COVID-19 as a share of GDP was the highest among G20 advanced economies.

Leaving aside recent critiques of Canada exercising its Covax option the mere fact that mechanisms like the Covid tools accelerator (ACT-A) and Covax were set up in record time is a significant win for multilateralism. They are especially a win for Canada which has been a leading and foundational supporter in almost every initiative. At present Canada is the second largest contributor to ACT-A, among the top four to the vaccine pillar; and the second largest donor to the Covax AMC which procures COVID-19 vaccines for the poorest countries.

It is inescapable however that these mechanisms point to gaps in the system. The fact that funding to meet their resource needs required extraordinary fiscal allocation is a consequence of imbalanced burden sharing across donors in more normal times and persistently underfunded aid budgets.

The dilemma Canada faces is a product of two factors: timing and messaging. Despite having by far the highest vaccine procurement to population ratio (and an even higher ratio relative to disease burden), at present Canada’s vaccination rates are among the lowest compared to peers. This, in turn, has meant that Canada has been ‘politically forced’ to exercise its self-financed Covax procurement option (SFP) which does not count as foreign aid. The timing of this in Round 1 when only a limited supply (approx. 320 million does) is being made available and a wide range of developing countries – many of Canada’s largest aid recipients – have expressed frustration with Covax (for example, the AU, South Africa, Honduras, Serbia, Mexico, Sri Lanka, Thailand) is particularly unfortunate.

Canada’s allocation of approximately 1.9 million doses from Round 1 amounts to 0.6% of total allocation, but a much higher share (3.6%) of allocation to SFP countries. Lack of transparency and unclear messaging makes matters worse. For example, domestically Canadian officials have reported a figure of 3.2mn expected from Covax by the end of June. Canada’s Covax reported allocation is in line as a share of population with other SFP countries. The higher figure would bring it in line with allocations to the poorest and neediest AMC countries.

Our research finds indications of one payment (CAD$110 million) likely having been made in late 2020 (though no hard evidence of this yet in official open data). But since Canada is contributing CA$440 million split between both the AMC (CA$220 million, which counts as aid), and SFP (CA$220 million) it is unclear what amounts towards which facility have been delivered so far (all payments are likely to be completed by the end of the fiscal year).

Canada’s messaging is confused by the fact that during the announcement of the commitment back in fall 2020, officials highlighted fairness, equity, and Covax as a shining example of multilateral cooperation. And yet downplayed or altogether neglected to mention that the facility was set up first and foremost to vaccinate essential health workers in the poorest countries and thereafter only up to approx. 20% of the general population per country.

Canada’s (minimum) Round1 allocation is close to that of Ghana and Mozambique, and almost identical both in terms of % of allocation and population to that of Ukraine – each, among the largest recipients of Canadian aid. Canada is not the only high-income country with low vaccination coverage to date. Yet none of the others that have similar coverage rates and have contributed both to the AMC and SFP, and are therefore are eligible to draw from Covax, have chosen to do so (for example, France and the Netherlands).

Beyond the solidarity rhetoric, the data imply collective action is also very cost effective. If drawn in full, the cost of procuring vaccines for 20% of Canada’s population via Covax would be (far) less than the federal government’s loan to GoodLife Fitness.

Canada’s experience is a lesson in the need for measured rhetoric and meaningful transparency. It demonstrates why simplistic burden sharing ideas, popular in the development community, fail to work in the case of global COVID-19 response. 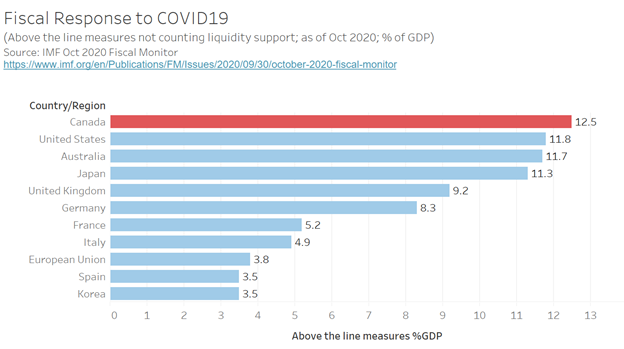 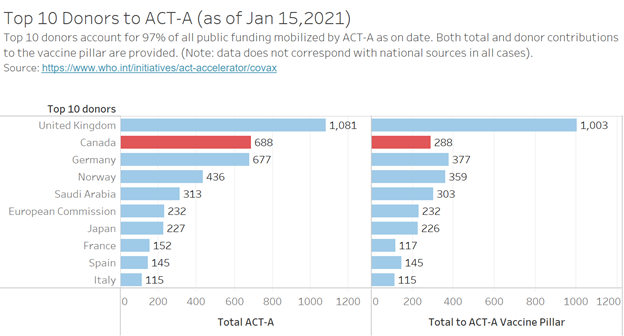 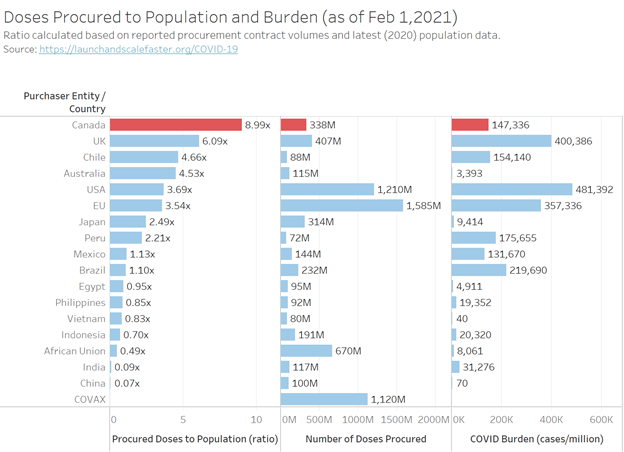 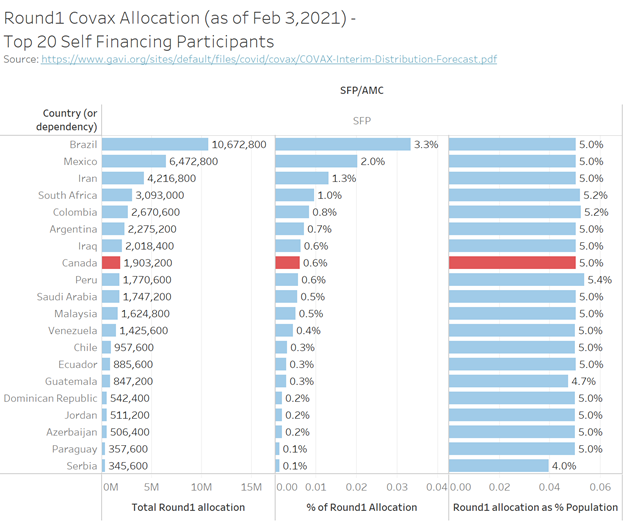 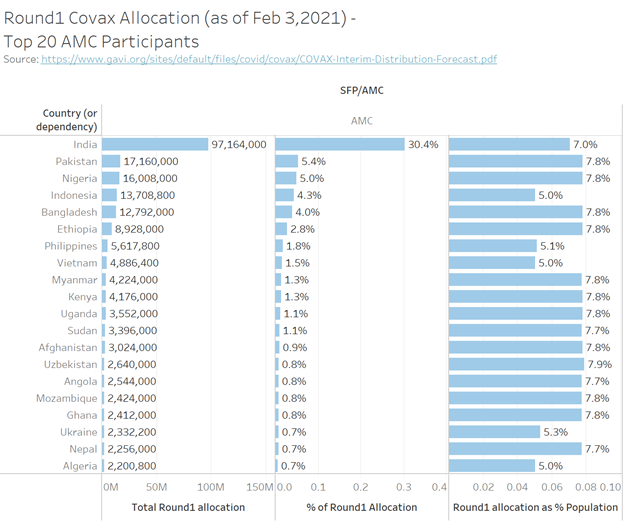 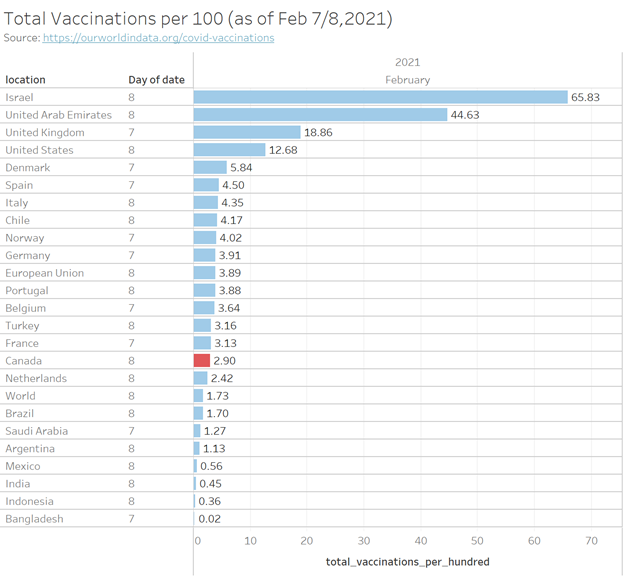 Note on inclusions in calculation of donor global COVID response (please see earlier analyses and links below for Canada). Data do not account for ODA/non-ODA distinction. They cover announcements tracked since the start of COVID, at the aggregate official level of fiscal allocation as opposed to project level. We have tried to avoid double-counting, but cannot guarantee this has been achieved.