Canada is competing to win one of the two available seats in the Western Europe and Others Group of states (WEOG) at the United Nations Security Council (UNSC). The election is scheduled for June 17, 2020 and Canada’s competitors are Ireland and Norway.

This analysis describes that:

Canada’s current campaign has been underway since early 2016. The content of the publicly-available campaign material has changed over time, with the current website content being the most specific. Canada’s focus is on being “stronger when we work together.”

It lists 5 priorities that it will take on at the UNSC “together/ensemble”, including:

These resemble the general pillars of the current government’s foreign policy commitments, but they are somewhat vague, as was much of the material presented at the WEOG debate recently.

It is unclear what Canada expects its contribution to be on the UNSC, were it to win a seat, given its platform is particularly vague and largely lists previous multilateral spending, without significant context. Similarly, it is unclear what a UNSC seat will mean for Canadians.

It also seems that some of Canada’s priorities are not specifically geared to the main issues on the Council’s agenda and what are predicted to be the major issues in 2021-2022. Deadlock is at an all-time high, but given Canada’s extensive experience on the Council, there is little to no strategy for managing that, or discussion of the hot-button issues causing deadlock, including tensions between China and the United States, global coordination on COVID-19, and US-Iran disputes.

Another issue that divides the Council is climate change. Canada has stated that one of its five platform items is combatting climate change “together”. This is going to be difficult, as climate change is predicted to remain a divisive challenge for the Council in 2021-2022, as there is disagreement between major powers as to whether it is even something the Council will agree to tackle. Canada’s existing description of its commitment to fighting climate change does not address this dispute clearly and is left vague, despite implicitly staking out a side. Climate change is clearly of high interest to Canadians. Similarly, Canadians should pay attention to the medium-to-long-term responses to COVID-19 over 2021-2022, something that Canada has begun to address in its campaign videos recently.

Discussions around Canada’s campaign are also surfacing many issues that are as much about domestic policy as they are foreign policy. For example, Adam Chapnick has noticed that the 2020 and 2010 campaigns are the first ones that are particularly partisan. This is clearly observable on the current webpage which uses many key rhetorical tools of Liberal Party of Canada, including “real change”.

Others, such as Pam Palmater, argue Canada cannot make positive contributions to peace and security globally given its actions on the territory it occupies. Citing key issues and policy documents including (but not limited to) the United Nations Declaration on the Rights of Indigenous Peoples (UNDRIP) and the National Inquiry on Missing and Murdered Indigenous Women and Girls, according to Palmater, Canada does not deserve the seat.

Whether Canada will win or lose is very difficult to predict, but regardless of the outcome, 2020 is clearly a crucial moment for significant inward reflection on Canada’s relationship with multilateral partners, both within and outside the UN system.

Why seek a UNSC seat?

States seeking a UNSC seat may see their election to the Council as beneficial to them and/or to the Council itself. They may want increased diplomatic access to Permanent 5 countries or other elected members, an increased ability to voice their positions and issues, status and recognition, and/or influence over the UNSC agenda. For Canada, a seat at this table will allow them to advance its vision for revitalizing multilateral cooperation, promoting gender equality, and working to achieve the SDGs. If Canada wins, it is likely that they will promote these issues heavily and be engaged on various related policy initiatives.

States can also participate in the working methods of the Council that have political value. Ralph and Gifkins have shown that the practice of ‘penholding,’ or the practice of coordinating meetings, visiting diplomatic missions, and drafting documents, statements, and resolutions, has allowed elected states to effectively challenge P5 power. Especially recently, elected states have increasingly taken over the penholding practice from the USA, France, and the UK. On humanitarian issues in Syria for example, Australia, New Zealand, Luxembourg, Spain, and Jordan, made relatively significant progress for the Council, circumventing significant deadlocks during their terms.

How does the election process work?

There are ten elected seats on the UNSC, in addition to the five permanent seats (the P5: USA, UK, France, China, Russia). Each election into a rotating seat is for a two-year term. The ten seats are divided into regional groupings as follows:

** There is an “Arab swing seat” that unofficially rotates between Africa and Asia-Pacific.

On June 17th, one seat in Africa, one in Asia-Pacific, and one in GRULAC are also up for election, in addition to the two WEOG seats. The upcoming terms for elected seats will begin on January 1, 2021 and go until December 31, 2022. States that wish to run for seats must announce this intention to the chairperson of their regional group at any point prior to the election, with some doing so up to a decade beforehand.

Elections are usually held in the General Assembly through a secret ballot, requiring a 2/3 majority to win. With 193 member states, 129 votes are the required 2/3, though not all General Assembly members necessarily vote.  If states have unpaid arrears to the United Nations, then they are unable to vote. At present, Security Council Report is reporting that the Central African Republic and Venezuela have unpaid arrears.

This year, elections will take place at a designated location where states can vote one at a time during specified timeslots, due to COVID-19 restrictions. Elections may have more than one round if a 2/3 majority is not reached in the first round.

This socially-distanced approach to voting means that diplomacy leading up to the vote has been more limited than usual, and if there is more than one round, there will not be the usual level of interaction for diplomats between rounds. Online video calls have been used between diplomats in the last few months, including the recently held debate between candidates for the WEOG seat.

The Politics of Elections

The UN Charter stipulates that the decisions of member states surrounding votes should consider “the contribution of Members of the United Nations to the maintenance of international peace and security and to the other purposes of the Organization, and also to equitable geographical distribution”.[i] As such, states tend to campaign on issues of peace and security and their ability to contribute to the UN’s initiatives, but elections are obviously much more complex and political.

There are often international and intra-state factors affecting voting. Internationally, major political issues at the United Nations can affect state votes. The foreign policy positions that states take both within and outside of their platforms do matter. For example, some have speculated that Canada’s recent vote change at the UN on human rights related to Palestinian self-determination signals awareness that its previous votes were unpopular abroad (votes since 2006 were relatively in sync with only the US, Israel, and a few island nations). This is especially common when states take issue with others’ votes in the General Assembly.

How much has been spent on the UNSC campaign

Many journalists and scholars have spoken of the money that WEOG states have spent on their campaigns, but it is often unclear whether these figures include salaries, aid spending increases, travel, and events, and whether any of them reflect expenses that would already be spent in that fiscal year.

That said, reports from Canada’s last successful campaign in 1998 demonstrate a cost of about $1.9-$2 million CAD. This is similar to what is reported as Canada’s spending for this 2020 election in constant dollar terms. Australia is reported to have spent around $25 million AUD in 2012 (though it is especially unclear what that includes) and the Netherlands recently spent $4 million EUR for its 2017-2018 term.

Good diplomacy also takes a significant amount of work and investment in New York City, at home, and abroad to secure votes. Currently, PassBlue reports that Norway’s expenses were approximately $2.8 million USD as of December 2019. $1.7 million USD of that was in 2019. Ireland’s were $798,900 USD as of November 2019. Canada’s were estimated around $1.56 million USD as of March 2020. Canada’s figure does not contain salaries, according to PassBlue, but they do not specify what the other figures contain. 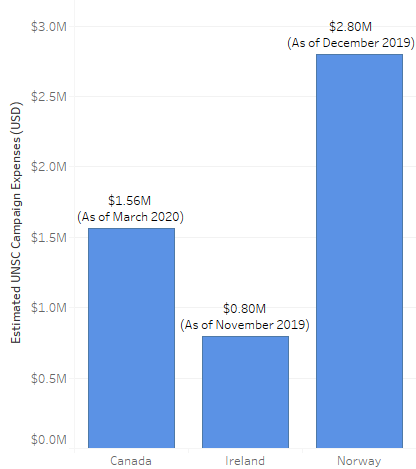 Generally, while the campaign requires money, it also requires work. Investing in the diplomatic operations behind the scenes is the most valuable thing that states can do. International organizations and their politics are built on relationships between people and the nature of those relationships can go a long way.