It may not be well-known beyond narrow foreign aid circles, but donors are allowed to count part of the cost of settling refugees in donor countries as ‘foreign’ aid.

In this post we look at the impact of the ongoing refugee and migration crisis on OECD-DAC (and select non-DAC) donor foreign aid budgets and reporting.

The analysis is based on recently updated (December 2015) OECD-DAC creditor reporting system data, and UNHCR data.

The analysis is timely given the DAC is discussing changes to the official definition of foreign aid, including potential new rules and criteria for what in-donor refugee costs can count (and how) as foreign aid.

The ongoing refugee crisis and its implications (including fiscal) for donor countries presents the latest challenge for donors as they think about the future of foreign aid.

Since 1988 the OECD-DAC has prescribed rules on what counts and how donors can report in-donor refugee costs as part of ODA. This is not uncontested however, even among donors. In 2001 the DAC working party on statistics debated removing in-donor refugee costs from ODA because, as some donors argued, inclusion of such costs (which do not entail a financial transfer to developing countries) undermines the credibility of the concept of ODA. But the proposition was rejected. Since that time this expenditure element has grown significantly and (as we see below) now makes up a significant share of ODA for several DAC donors.

This is particularly the case in recent years given the sharp increase in both the human and socioeconomic impacts of the refugee and migration crisis. Many donors (especially in Europe) have witnessed increases in refugee costs charged to their aid budgets and reported as ODA that represent a decisive break from long-term trends. This includes donors that are hailed as leaders in the aid community (for instance for meeting the 0.7% of GNI aid generosity target). By most accounts this crisis is neither close to ending nor a short-term blip. So this is merely the start of the potential impact from the perspective of aid budgets and reporting (especially as DAC reporting systems are so slow and dated. For e.g. the Dec 2015 update only brings the data up to final comparable figures for 2014. Whereas the impact in 2015 for many donors is likely even greater).

Given the situation in Syria, the refugee crisis is growing at an almost unprecedented rate. Not since the late 1980s and early 1990s has the number of refugees in the world grown at rates witnessed over the last couple of years.

The total global refugee population now stands at around 15 million (14.3 million by 2014). Between 2012 and 2014 the refugee population grew at an astounding 36% (or approx. 22% in just one year from 2013 to 2014). Most of these refugees remain in countries in and around the region, and not in donor countries. That said the rate at which refugees are entering donor countries, especially in Europe, is unprecedented. 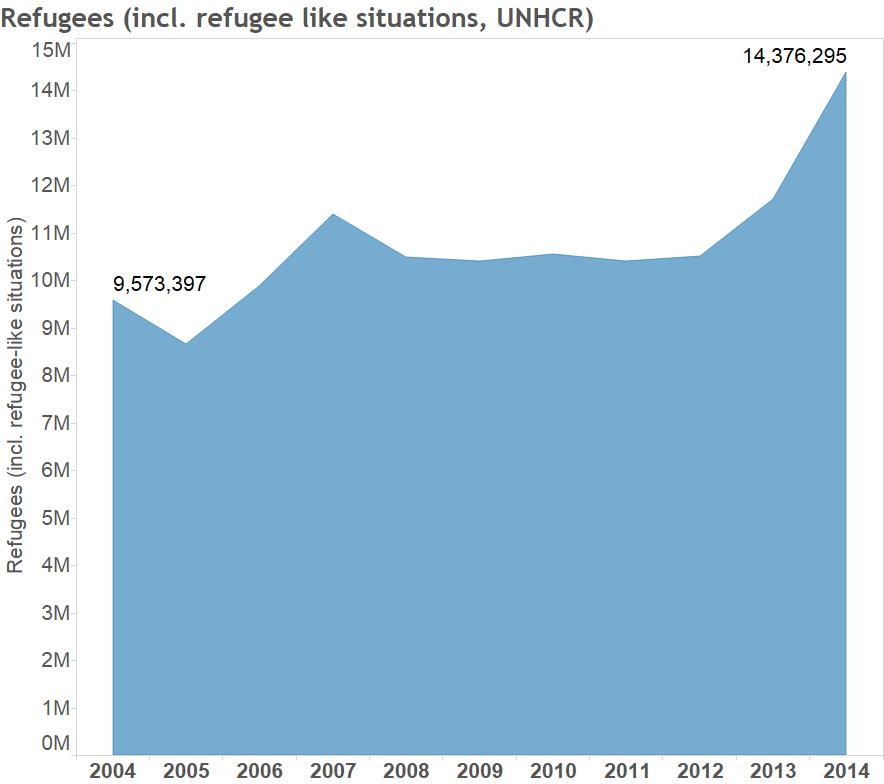 The refugee crisis has been impacting donor aid flows for a few years now (at least since 2012 reporting). Three graphs below show the top 20 largest donors in the world, change in aid levels (2014 compared to 2013), and donor ODA/GNI ratios – the latter a benchmark of donor generosity that compares aid levels to size of donor economies (in this case gross national income).

The US remains the largest aid donor (by far) providing about $33 billion, out of the total $137 billion reported as OECD-DAC foreign aid. It is followed by the UK, Germany and the EU, among DAC donors. The surprise large increases in 2014 are from non-DAC donors. Chief among them Saudi Arabia which now ranks the fifth largest aid provider, ahead of France, Japan, and all the Nordic countries. As can be seen below, by far the largest increase in aid in 2014 compared to 2013 was from Saudi Arabia. Similarly, aid from Turkey and the UAE has also been rising in recent years. In each of these cases increases in aid flows relate to the ongoing crises across the region. Aid to and from these countries has been rising since the Arab spring.

Viewed from the perspective of the ODA/GNI ratio however, the most generous countries remain the Nordics – Sweden, Norway Denmark, and slightly behind is Finland; the UK (which recently achieved the 0.7 target); and the Netherlands. In 2014 (and 2013) however the UAE was the most generous with a ratio of 1.3% of GNI. Only 4 major DAC donors – Sweden, Norway, Denmark and the UK – now meet the 0.7% target; given the Dutch, whose aid flows have been largely declining since 2008, now fail to meet the 0.7 target.

As we show below, the ongoing refugee crisis has a lot to do with targets like 0.7 – and whether or not they remain relevant – given the link between aid flows and in-donor spending on refugee settlement. 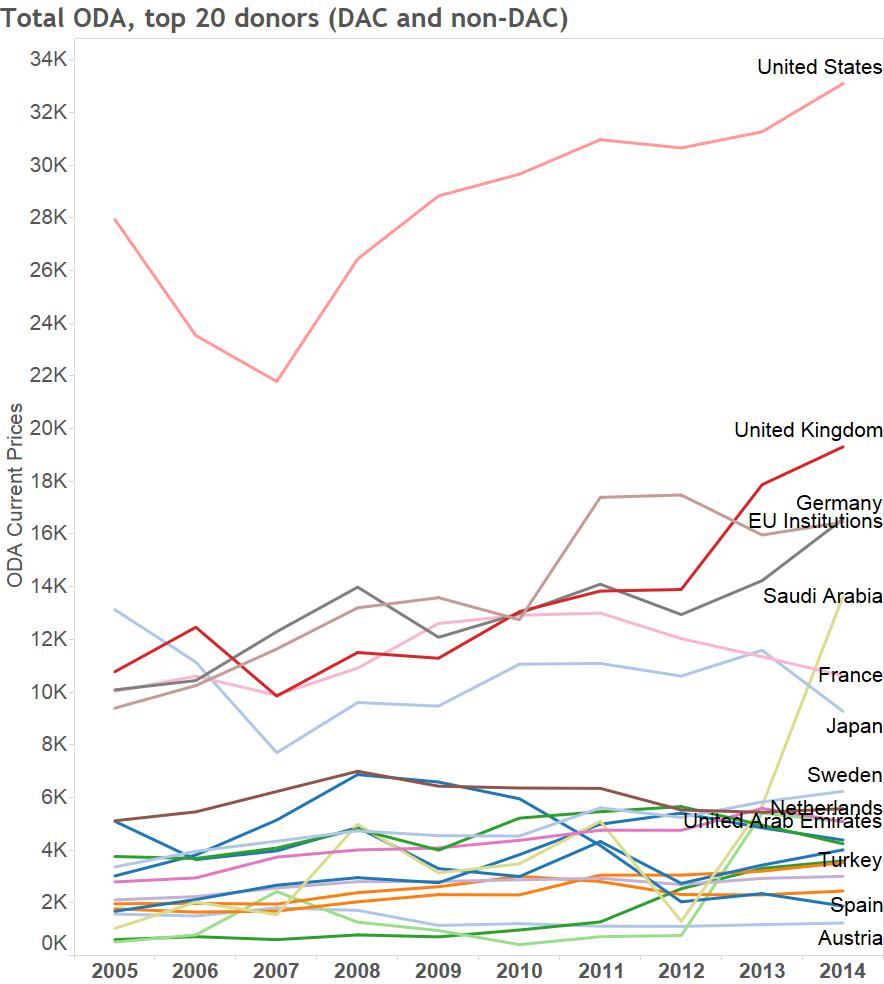 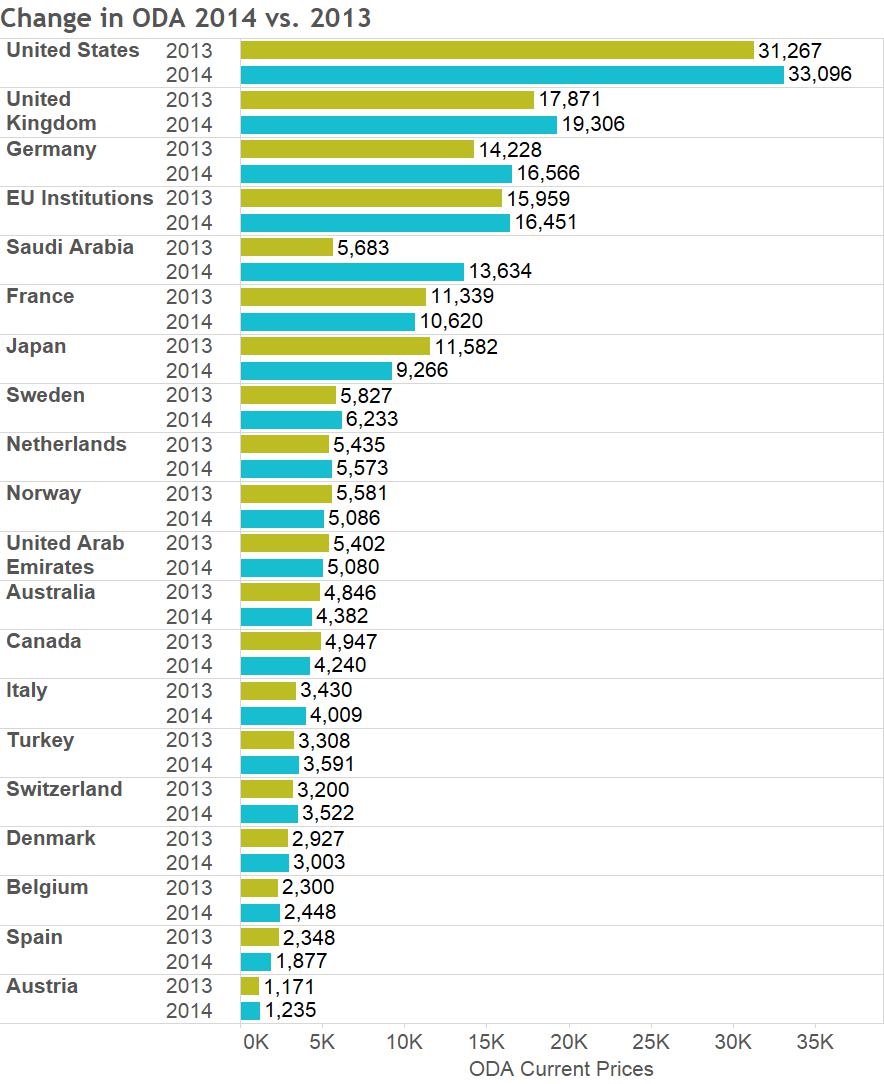 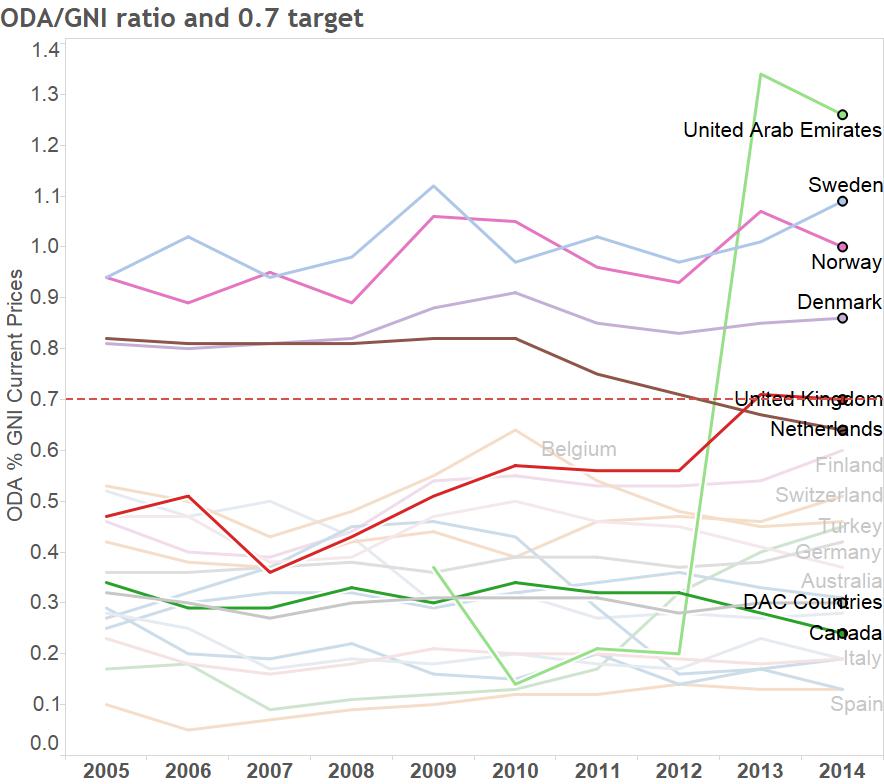 The growing impact of the refugee/migration crisis, especially in European countries, is starting to have an effect on aid figures. Three graphs below illustrate this point.

First, as can be seen below, the amount of in-donor refugee costs reported as ODA has grown steadily. For all donors (DAC and non-DAC) this totals about $7.4 billion in 2014, the majority of which is reported by DAC donors. $6.6 billion or 4.8% of total aid from DAC donors is actually spent in donor countries, in the form of costs related to the settlement of refugees.

Since 2005 the share of in-donor refugee settlement costs as a percentage of total foreign aid has ranged between 2% and 3%. However in 2014 this ratio broke out of levels that would be predicted by near term trends, to nearly 5%. This is in keeping with the unprecedented jump in the number of refugees globally, and the growing number seeking refuge in European and other donor countries. (Note: these numbers do not include humanitarian spending by donors in the region, and are only the cost of settling refugees in donor countries that is reported as ODA).

In-donor refugee costs reported as ODA have also increased in non-DAC countries (in fact nearly 10-fold from 2013 to 2014), but from a low base.

However, as we see below, the ratio and the rate of growth varies greatly across countries and is much higher than the DAC average for a number of important donors. 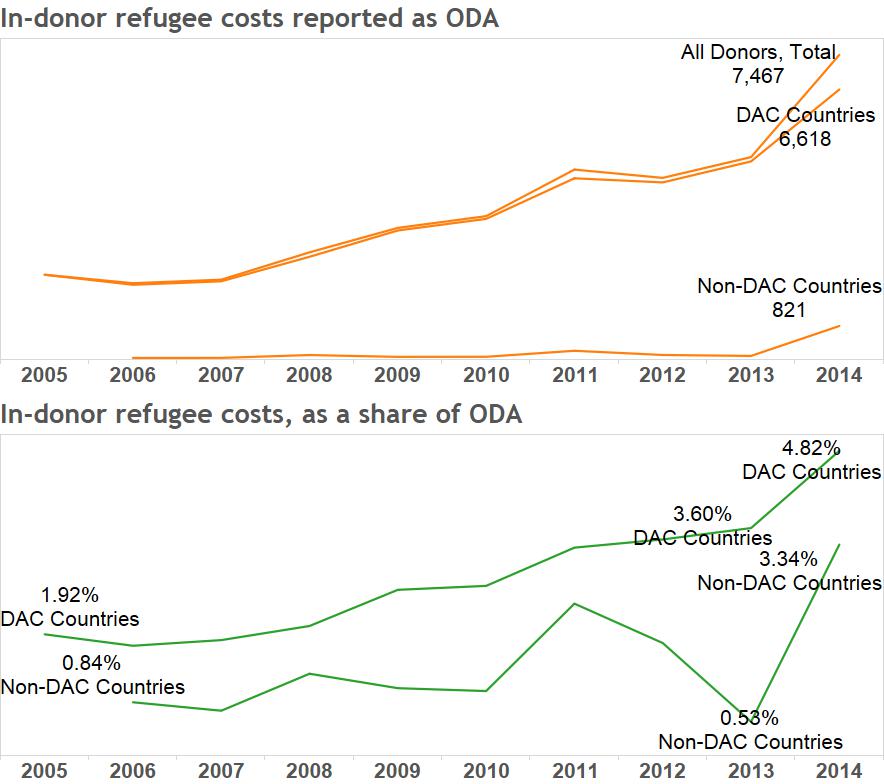 The graph below provides trend data for the donors that report the largest absolute levels of in-donor refugee costs as ODA. It also shows how much these costs have grown from 2013 to 2014.

The US, Sweden, Netherlands, Italy, France and Switzerland report the largest amounts in in-donor refugee settlement costs as ODA among DAC donors (Turkey reports a large amount among non-DAC donors).

Herein lies an important issue when we use these figures in benchmarks of aid spending (like in the ODA/GNI ratio).

Expenditure elements such as in-donor refugee settlement costs, which have been added to the definition of foreign aid over the years, leave a lot up to donor accounting and reporting discretion.

Some donors who take in a lot of refugees typically have not reported a large amount in settlement costs as ODA at least in the past (e.g. UK and Germany). Others, that arguably take fewer refugees, have consistently reported a large amount of these costs as ODA (e.g. Switzerland). Whether and how this relates to actual refugee settlement – the subject of a forthcoming analysis – remains under analyzed. But we know there are discontinuities in the data that relate to donor discretion (e.g. likely linked to its own regional refugee/migration crises, refugee settlement costs accounted for around 5% of Australian aid in 2005 and 7% in 2013, with little or nothing in between or in 2014). So this expenditure element can be interpreted as an add-on, which donors add to the sum of traditional projects and other aid programming.

But it can change how we look at targets like 0.7.

For example, if we exclude in-donor refugee costs, Denmark which reports an ODA/GNI ration of 0.86 (well above the 0.7 target) and indicates a 58% increase in in-donor refugee costs in 2014 compared to 2013, would fall to 0.78 – still above the target but not by much (especially given Danish aid is expected to decline). The ratio would also fall for other stalwart aid donors like Sweden – still well above the 0.7 target, but nevertheless a big swing given in-donor costs now amount to approx. 18% of total aid, and are expected to increase substantially. The Netherlands, which no longer meets the 0.7 target would see its ratio go from 0.64 to 0.52 – also a big swing given the sharp increase in refugee costs in 2014 which now account for 17% of Dutch aid.

Perhaps the standout impact of removing in-donor refugee costs from ODA would be in the case of the UK which has been much celebrated as the latest major donor to meet the 0.7 target (in turn bolstering the target’s relevance). Even though the UK reports a relatively small amount in in-donor refugee spending as foreign aid, because this jumped substantially in 2014, if we remove this element, the UK no longer meets the 0.7 target in 2014 (albeit by a fraction). 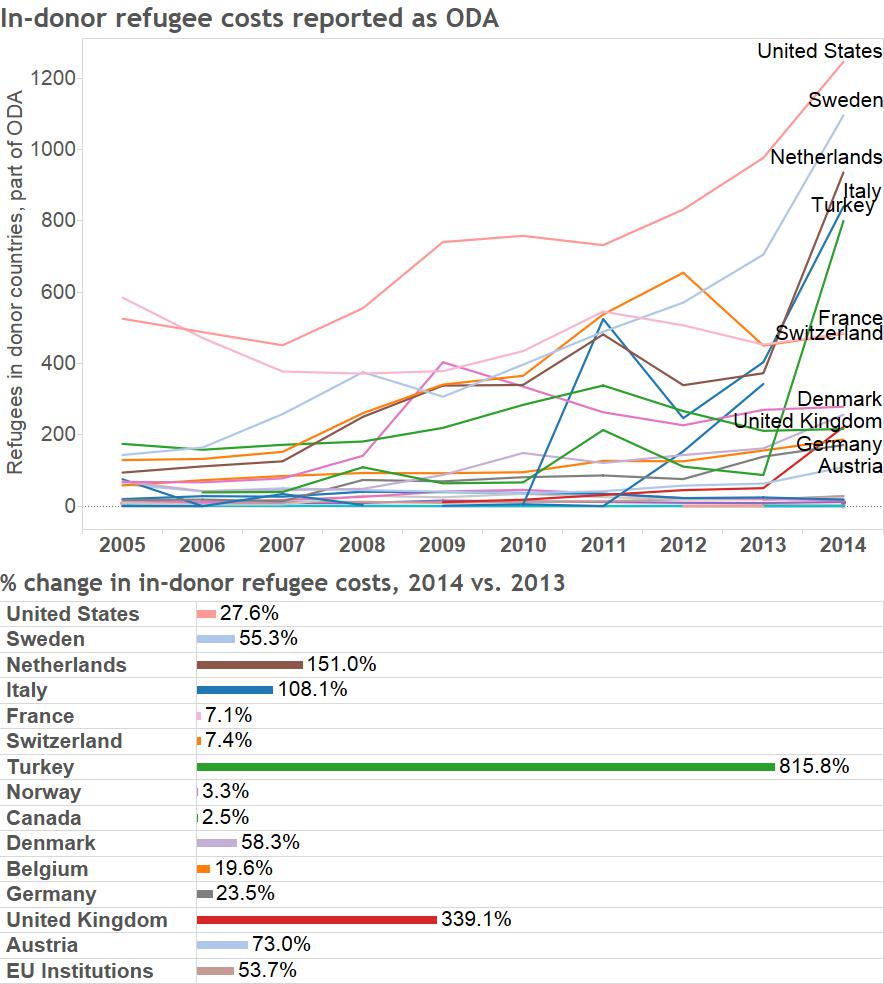 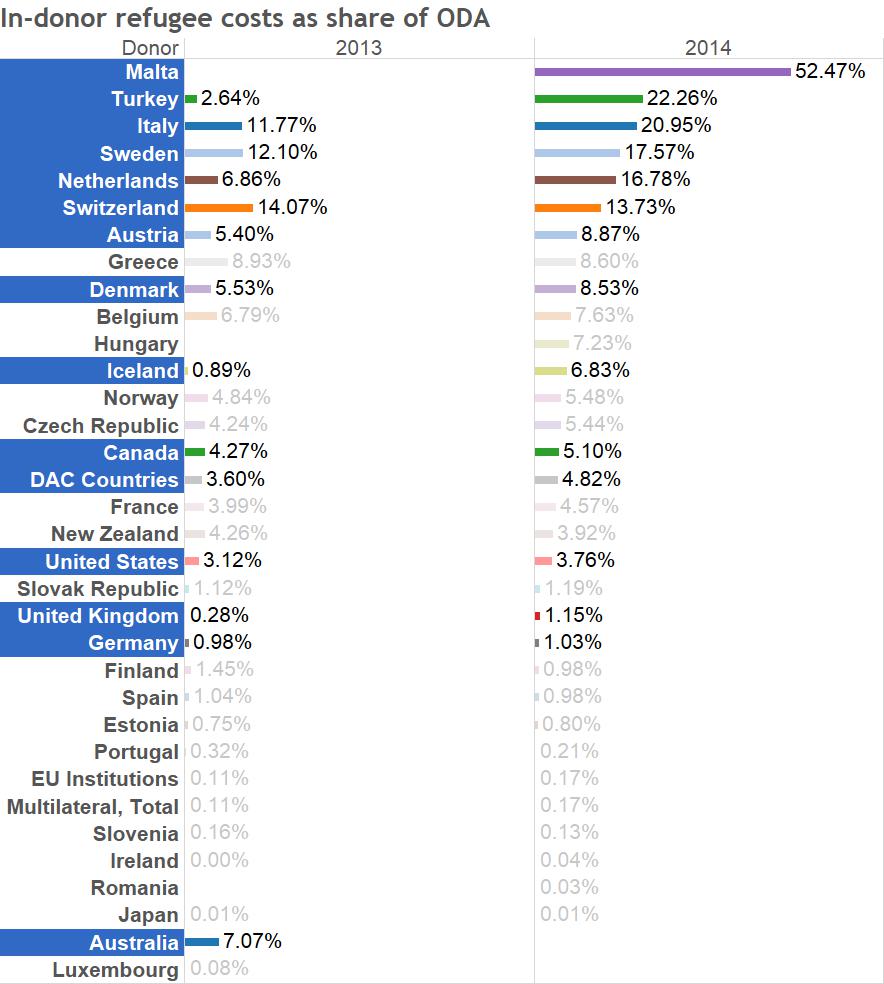 There is a great deal of talk about policy coherence and whole-of-government approaches in the aid community. Nowhere is the need for action more apparent or urgent than in the case of refugee settlement. Aid agencies may have a greater role to play at home in the future than is currently envisaged. And success at home may have a greater impact on the efficacy of traditional aid programming overseas.

Looking ahead, longer-term perspectives that aim to secure greater and more predictable financial resources, which will invariably be needed to counter even more costly crises and their potential refugee/migration impacts (e.g. as a result of climate change), should guide how we update our thinking on aid and donor agencies today.

What should Canada’s portfolio for private sector engagement in development look like?