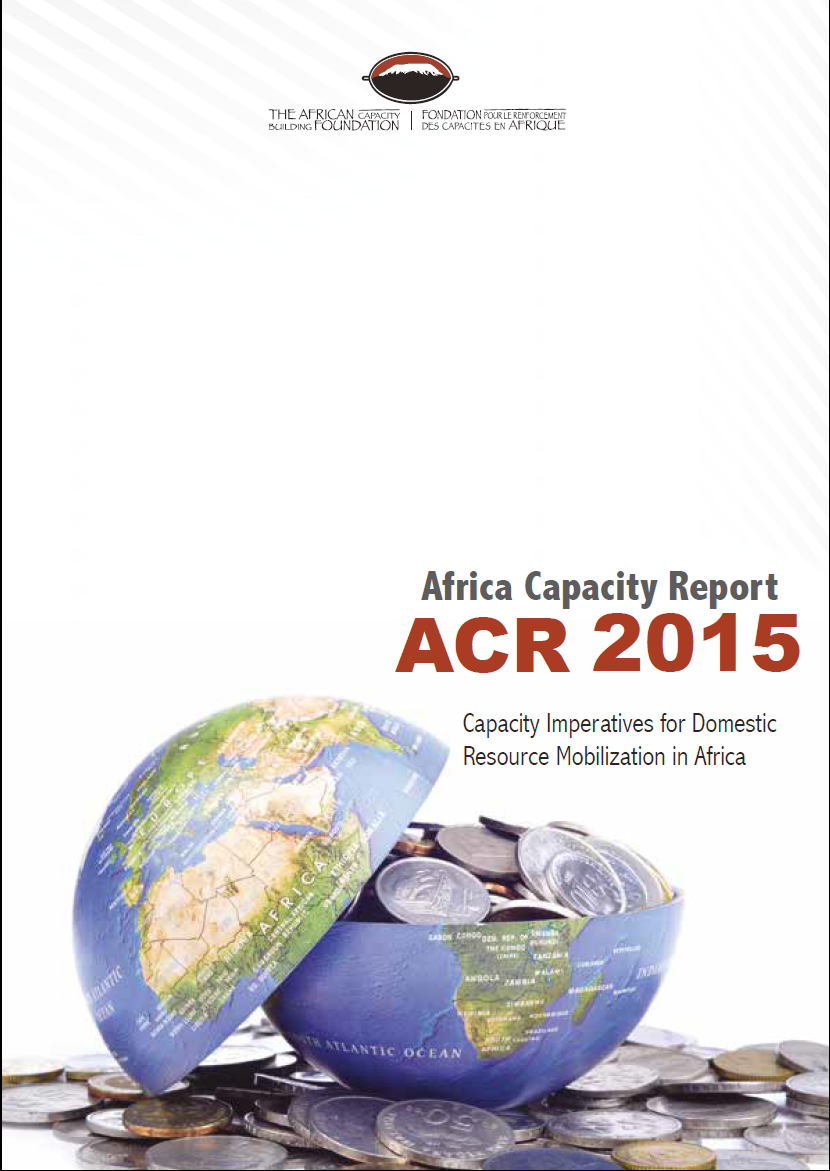 The African Capacity Building Foundation (ACBF)  has since 2011 produced an annual Africa Capacity Report (ACR).  In addition to analyzing Africa’s capacity – individual, organizational and societal ability to set goals for development and achieve them – development landscape, each ACR focuses on a particular theme.

I was asked to contribute to the recently released 2015 edition on Capacity Imperatives for Domestic Resource Mobilization (DRM) in Africa and the full report is available here.  What does the report tell us?

It is clear that African countries will need to mobilize more resources domestically and find ways to fight illicit financial flows (IFFs) if they want to meet the ambitious Sustainable Development Goals (SDGs) and those of Agenda 2063. Aid and external flows, while necessary, will be insufficient.

It is estimated that Africa has lost more than $1 trillion in IFFs in the last 50 years and is now losing more than $50 billion a year; by comparison, the region received $55.8 billion in official development assistance (ODA or foreign aid) and $61.2 billion in remittance inflows in 2013.  Some countries such as Burkina Faso, Liberia, Malawi, Burundi and Zambia are losing massive amounts to IFFs relative to tax revenue; in the case of Zambia, the amount lost to IFFs is greater than taxes collected and remittance inflows combined.

As far as taxation is concerned, there has been a lot of progress in terms of total taxes collected.  In 2013, the continent collected about $508 billion in tax revenues, compared to only $123 billion in 2002, the year that the Monterrey Consensus on Financing for Development was adopted.  However, the total numbers mask a lot of variation at the country level.  While the weighted tax-to-GDP ratio was 21.6% in Africa and 19.4 % in Sub-Saharan Africa in 2013, these averages are skewed by resource-rich countries.

Most countries in Africa have tax-to-GDP ratios below the regional average.  In particular, rising tax revenue is highly concentrated in a few resource-rich countries such as Algeria, Nigeria and South Africa that have a more unbalanced tax mix than non-resource rich countries.

Our analysis using data for the 1996-2013 period also indicates that more than half (27 of 47) of the countries examined have a tax effort index below 1, that is, a low ratio of tax collected relative to taxable capacity.  Among these low-effort countries are several resource-rich countries.  Although these countries could make more effort to increase their tax revenue from direct and indirect taxes, the availability of resource rents appears to distort the incentive to make such effort.  This confirms the findings from our earlier work.

Mobilizing financial resources beyond ODA and other external flows will be crucial to ending absolute poverty and achieving the other goals of the ambitious SDG agenda.

Tax performance metrics – average cost of tax collection or tax staff ratio – indicate that Sub-Saharan Africa has expensive and inefficient tax collection systems when compared with other regions.  In addition to closing tax loopholes, reducing tax exemptions and dealing with corruption within tax administrations, investing in the capacity of revenue authorities must be part of a broader fiscal reform agenda.  This includes hiring more and better trained staff and retaining them with the appropriate financial incentives, and modernizing tax administrations.

To complement the macro analysis, ACBF commissioned more than a dozen case studies to learn about country experiences with DRM and IFFs.  While a few of the cases indicated that efforts had been made to mobilize more fiscal revenues, thus confirming broader trends at the macro level, little or nothing has been done to manage fiscal expenditure better, and serious gaps remain in demonstrating efficient use of fiscal resources for service delivery.  Not a single country that was examined recorded any direct success worth reporting in combating IFFs, even where sophisticated institutions had been set up to deal with the problem.

Mobilizing financial resources beyond ODA and other external flows will be crucial to ending absolute poverty and achieving the other goals of the ambitious SDG agenda.  To the extent that African countries could raise their tax collection to a level that matches their taxable capacity, and if IFFs were curtailed even somewhat, the additional amounts mobilized could reduce the financing gaps that the region faces.  As an example, a quick back-of-the-envelope calculation indicates that a 2% increase in the tax-to-GDP ratio at the African level would close the entire current $50 billion annual infrastructure funding deficit that the region faces.