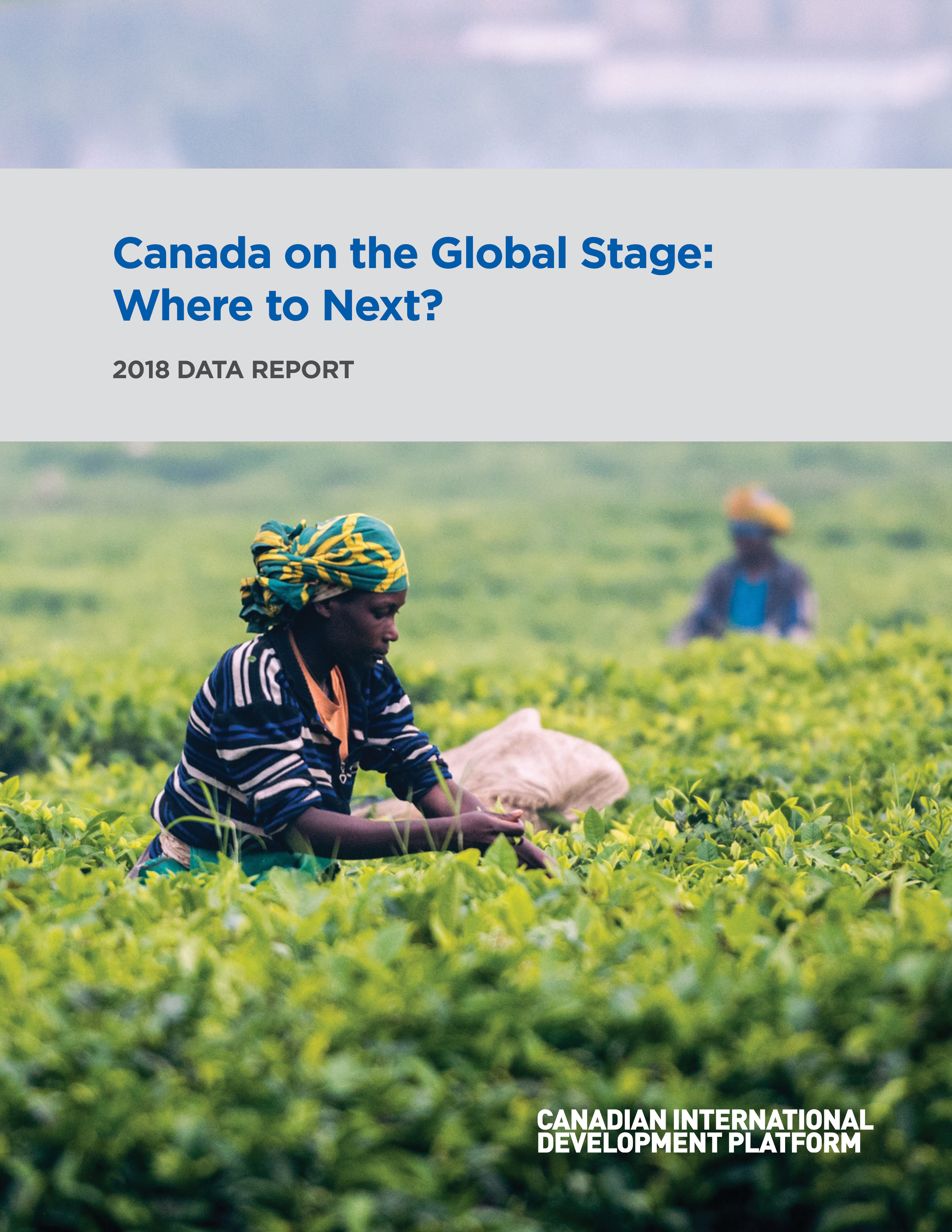 The Canadian International Development Platform (CIDP) proudly presents our 2018 Data Report, Canada on the Global Stage: Where to Next?, data-driven guide to evaluating political promises as we head into the 2019 federal election season.

This report covers three main pillars of CIDP’s analytical framework to provide a comprehensive assessment of Canada’s contributions to, and linkages with, developing countries: foreign assistance, trade and investment, and migration and remittances.

Canada launched its Feminist International Assistance Policy (FIAP) in June 2017. This section analyzes the gender focused and targeted aid landscape and assesses Canada’s position within the same. It makes the case for greater focus, innovation and more rigorous assessment. Gaps in transparency and accountability continue to limit analysis of whether and to what extent the FIAP is meeting its ambitions.

2. Trade and Investment: The Push for Trade Diversification and Improvement of Canada’s Investment Climate: Balancing Expectations with Structural Realities

Diversification of Canada’s trade footprint and steps to attract investment and improve the investment climate have been key goals across the political spectrum in recent years. This was especially the case during the first mandate of the Liberal government. This section analyzes progress with respect to diversification and Canada’s investment climate. It argues that the need for trade diversification is greater than ever, and that developing and emerging economies are key in this respect. However, pursuing trade and investment deals alone will be insufficient. More can and should be done to promote access to the Canadian market, both as an import and investment destination. Even more importantly, Canadian companies need to be more strategically supported in order to leverage trade and investment agreements and opportunities more generally, especially in frontier markets. Despite policy measures to the contrary, Canada’s investment climate has deteriorated markedly in recent years. Steps should be considered to support and safeguard Canadian competitiveness and attractiveness in key priority sectors and sunrise industries.

3. Migration, Remittances and Sharing the Global Refugee Burden: A Country of Immigrants, Newcomers are Key to Canada’s Economic Prospects: Are We Doing Enough to Make the Most of This Canadian Comparative Advantage?

Canada is a country of immigrants. Migration, especially economic migration, is key to Canada’s economic prospects. Given the geographic composition of where newcomers are and will increasingly come to Canada from, immigration is a key development issue for Canada. This section argues Canada needs a broadbased strategy that links immigrant intake targets not only with economic factors but also integration capacity. The decision to settle a significant number of Syrian refugees was celebrated both internationally and at home. Our analysis provides a comparative perspective on Canada’s contribution to sharing the global refugee burden. More can be done to help facilitate both brain circulation and drive down remittance costs (that are still high by global standards). However, closing known data and informational gaps is a necessary starting point.

Director of International Development Studies and Professor, University of Guelph