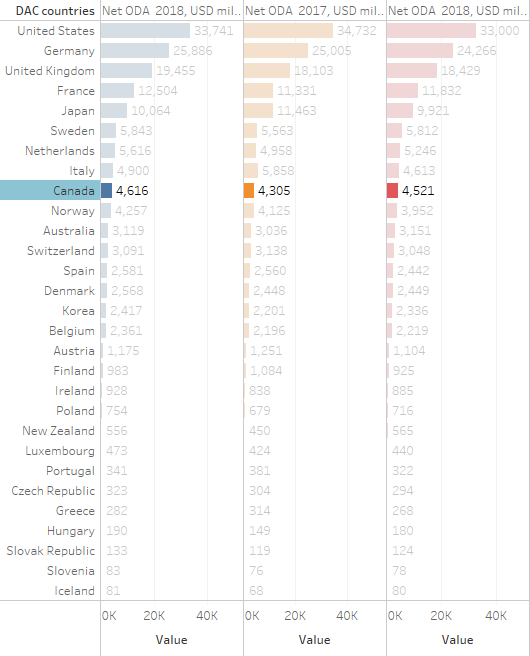 Quick overview of comparative aid statistics from the OECD-DAC for 2018. Click on images below to see full page view.

The decrease of net ODA (in real terms) can be attributed to the decline of in-donor refugee costs incurred by OECD-DAC donors in 2018. These costs include money spent inside donor countries for settling refugees during their first year, which according to DAC reporting rules can be reported as ‘foreign aid’ (accounting and reporting as ODA is up to donor discretion).

2018 data also reflect reporting of certain private sector instruments (PSIs) as ODA. Rules surrounding PSIs are still provisional and the DAC is yet to achieve consensus on key areas, however provisional rules do allow for reporting of non-grant instruments such as equity, debt and capitalization of specific funds, vehicles and institutions (such as bilateral development finance institutions or DFIs). Contributions are either counted on an initial face value basis (e.g. capitalization of DFI) or cash-flow basis (e.g. loans to or equity directly in private sector entities).

The net effect of the implementation of the new reporting methodology at the moment is small. The overall net addition to ODA is 2.5% in 2018. However, impacts on individual country figures for major donors range from +40.8% for Japan, to -2.8% for France, and -3.5% for Germany.

Recent increases in allocations to Canada’s International Assistance Envelope (IAE), for e.g. as announced in  Budget 2018, are influencing Canadian ODA.

2018 figures are also influenced by Canada taking advantage of new OECD-DAC provisional PSI rules. The initial contribution of CAD$100 million to the new DFI, FinDev Canada, is reported as ODA, as permissible under the new rules.